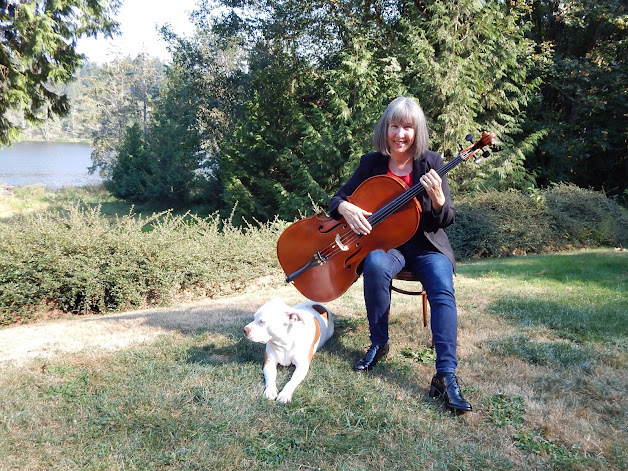 Pamela Roberts grew up in Tacoma, Washington where she began her cello studies at the age of 11.  Her talent on the instrument was immediately recognized and she received generous support to develop her musicianship, most notably from the Tacoma Musician's Union.

Roberts became an accomplished cellist and National Merit Scholar.  She was principal cellist of Washington's All State Orchestra and String Congress in Los Angeles. She received a full scholarship to the University of Puget Sound and then the University of Washington where she completed the five-year Bachelor’s Degree in Cello Performance (cum laude). While attending the UW Roberts won the top music scholarship for 5 years - the Brechemin Foundation Award. Pamela continued on full scholarship as a graduate student, completing two full years of graduate studies towards a Masters in Cello Performance. She stopped just short of completing this degree due to the intensity of her performing and teaching schedule.

Pamela's primary teacher at the University of Washington was Eva Heinitz, with whom she studied both cello and viola da gamba. Her other cello instructors included Toby Saks, Alan Harris, Robert Gardner, Daniel Lynch, Vivian King and Lou Petrulis. She was chosen to participate and received a full fellowship to the exclusive Cleveland Chamber Music Seminar where she studied with members of the Budapest and Juilliard String Quartets. She received a full fellowship to the Aspen Music Festival for three years. She studied in Master Classes with Janos Starker, Gabor Rejto, Michael Tree, David Soyer and Yo Yo Ma.

Roberts became the faculty cellist at the University of Puget Sound, a member of the faculty piano trio and principal cellist in the Tacoma Symphony. She also performed as a free-lancing solo cellist. She was the first female musician hired into the 5th Avenue Theatre orchestra in Seattle, where she played solo cello in Broadway shows. As a free-lancing cellist Roberts performed with the Seattle Symphony, Seattle Opera, Pacific Northwest Ballet, Philadelphia String Quartet, Northwest Chamber Orchestra, Tacoma Symphony, Paramount Theater Orchestra and Seattle Early Music Guild.

Pamela is principal cellist in the Port Townsend Symphony Orchestra. In 2022 she was featured soloist with the PTSO, performing Piazzolla's "Grand Tango." She was also featured soloist with the Bremerton WestSound Symphony, playing Vaughn Williams' Dark Pastoral and Leonardo Leo's Cello Concerto in A major (L20). Pamela performs as a recitalist with five pianists on the Olympic Peninsula: Sheila Harwood, Helen Lauritzen, Michael Carroll, Lisa Lanza and Sung-Ling Hsu.

Pamela is married to the well-known jazz musician, Howard Gilbert – a retired percussionist from the Seattle Symphony. They have been married for over 40 years. They raised two daughters together and a son from her husband’s previous marriage – all are grown and living in the Seattle area.  Now they live on the Olympic Peninsula of Washington State where together they own and manage their family forest, Lost Mountain Tree Farm.